Chilean Rose Hair tarantula is the common name given to the species Grammostola rosea. With colors ranging from a muted grey to rose pink, it’s easy to see how these fairly low-maintenance spiders got their name. The easy requirements of rose haired tarantula care, as well as their general availability due to being imported and captive-bred, has led the Chilean rose hair tarantula to be recommended as the “beginner species” of tarantulas. Still, many enthusiasts enjoy keeping one or more rose hair tarantulas in their collections.

The Molting Process of Grammostola Rosea

Grammostola rosea is native to desert and scrub regions of Chile, as well as Argentina and Bolivia. Primarily nocturnal, they can be wanderers and spotted roaming their habitat in captivity. In the wild, the rose haired tarantula can be found in vacated rodent burrows.

They are a relatively average-sized tarantula, with a leg span from 4 ½ to 5 ½ inches and a rather long lifespan as well. Female Chilean rose hair tarantulas in captivity can live upwards of twenty years, while males have a much shorter lifespan averaging somewhere between 2 and 5 years of age. After reaching maturity, males almost completely stop molting. If they do go into a molt, their mature sex organs prevent them from molting properly.

Because the rose hair tarantula is generally a docile species, many keepers handle them without any issues. In fact, these spiders can often be spotted as living props in movies and photoshoots due to their calm nature. However, incessant handling of any animal can irritate them, and the Chilean rose hair tarantula is certainly not excluded from this. If irritated, rose haired tarantulas will put on a threat display by raising their front legs to show off their fangs in full view. Since they are also a “New World" species, their first defense is usually a swift few kicks from the rump to disperse their irritating hairs at whatever they feel is a current threat. These hairs can cause minor irritation to the skin and, if inhaled, the lungs as well.

The Chilean rose hair tarantula also possesses a mild venom. While it is potentially painful, handlers unlucky enough to be at the receiving end of a bite have compared it to that of a bee or wasp. However, if you or someone you know is allergic to bee and wasp stings, it’s recommended that they do not handle your tarantula.

Chilean rose hair tarantulas can be kept in a relatively small enclosure, like a 5 to 10-gallon aquarium or terrarium. These tarantulas are notorious redecorators, often seen uprooting and moving the décor and substrate around their enclosures. Width is certainly more important than height. Too high of an enclosure can result in falls that can harm or even kill Grammostola rosea. They are climbers and often cling to the lids of their enclosures. As a result, be sure that your tarantula’s home is escape-proof. No one enjoys searching for a missing spider.

Optimally, the rose hair tarantula should have about 3 to 4 inches of substrate so they can burrow. The substrate should be able to drain quickly if water should spill inside the enclosure. Too wet of an environment will cause unnecessary stress for your spider. Potting soil that is both organic and pesticide-free, mixed with shredded coconut fibers or peat moss, can be used to achieve proper bedding and optimal rose hair tarantula care. The addition of artificial or live plants will add a pop of color to your enclosure and help provide the necessary hiding areas for your tarantula to feel both safe and secure. Pieces of cork bark, cholla wood or even upturned terracotta pots can be used as well.

Since they are a desert-dwelling species, the humidity requirements for rose haired tarantula care are not particularly high, but they should range between 65 and 70 percent. This can be achieved by placing a small dish or bottle cap within the enclosure, and the occasional misting only if absolutely necessary. However, be sure not to spray your rose haired tarantula. The environment should be dry, but not dry enough to dehydrate your spider. Grammostola rosea is a relatively hardy species that lives in a natural environment where the temperatures fluctuate daily. If you are comfortable with your current room temperature, your Chilean rose hair tarantula is more than likely fine as well.

As with most arachnid species, the Chilean rose hair tarantula is an opportunistic feeder. Its diet consists of mainly insects, but it has been known to take on other small animals like lizards. Popular feeders that are found throughout many pet stores are mealworms, live crickets and 3/16" - 1/4" Dubia roaches for Chilean rose hair tarantulas. Variety is key for your tarantula to thrive. Mealworms can contain too much fat, and crickets can often be low on the nutritional value scale (they are often referred to as the “popcorn” of the feeder world). As a result, it is important to make sure that your feeders are being fed a healthy diet as well. What goes into them goes into your pet!

Feeders high in calcium should only be fed as an occasional treat. This can not only be found in vertebrates such as pinky mice and lizards, but also in invertebrates such as butter worms. Feed sparingly and remove any discarded feeders and waste to keep your rose hair tarantula’s enclosure clean.

Never feed your animals anything that was captured from outside. In addition to exposing your pet to potential parasites, you also risk the chance of exposing your Chilean rose hair tarantula to pesticides that will result in their untimely death.

Refusal of food is not uncommon, especially if your new rose hair tarantula is a recent import. Stress and other added factors can contribute to a lack of appetite. To ensure optimal Chilean rose hair tarantula care, remove any live feeders that your tarantula hasn’t eaten. Adult tarantulas in general do not eat daily. A weekly feeding is more than sufficient to keep your pet at a healthy weight.

Fasting is not uncommon for Grammostola rosea, especially in the days or even weeks prior to a molt. Tucked legs, erratic behavior or a shrunken and poor looking abdomen are signs of illness. Seeking out the advice of a vet that specializes in exotics, or even an experienced keeper, is highly recommended if you think that your Chilean rose hair tarantula may be ill.

The Molting Process of Grammostola Rosea

Molting is a very important process that all arachnids go through; it’s absolutely necessary for them to grow. The Chilean rose hair tarantula is an invertebrate which means that its skeleton is on the outside of its body. While the process of molting might seem daunting to a new keeper, you’ll find that if your husbandry is correct there is very little to worry about when your tarantula comes to this stage. Females rose hair tarantulas will continue to molt throughout their lives, but males will almost completely stop after reaching sexual maturity.

Chilean rose hair tarantulas molt much more frequently as they gain size and grow beyond being a hatchling or spiderling. Visually, you might notice that your rose hair hatchling is getting darker before a molt. As they grow into their adult colors, however, this will become less and less prominent. Lack of appetite and general lack of movement is usually a good indicator of a molt. If you spot your rose hair tarantula laying on its back with its legs in the air, this is the beginning of the molting process. Be careful not to disturb your spider during a molt. If there are any live feeders inside the enclosure, remove them immediately as your Chilean rose hair tarantula will be at its most vulnerable when it finally emerges from the molt. 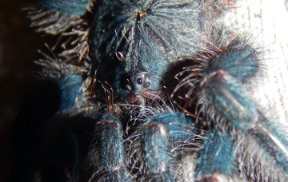 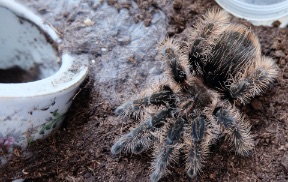 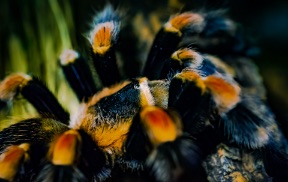