Native to the woodlands and forests of the mountainous regions of Kenya and Tanzania, the Jackson’s chameleon has been likened to a miniature triceratops because of the prominent horns present on the male’s head. Highly territorial, male Jackson’s chameleons will interlock these horns in competitive jousting matches, attempting to knock each other off narrow tree branches. Females lack this distinctive three-horned feature but often have minimal traces of the rostral horn just above their nose. These glorious creatures are popular reptilian pets, owing to their unique characteristics. Read on to learn more about the Jackson’s chameleon diet, housing and more.

Smaller than most other species of chameleons, the male Jackson’s chameleon grows to about 13 inches in length, with their prehensile tail accounting for nearly half their size. Females are significantly smaller, averaging about 9 inches in length. When properly cared for, the horned chameleon can survive in captivity for 5 to 10 years.

Because they need ventilation, Jackson’s chameleons should not be kept in glass enclosures. A fine metal or fiberglass mesh cage measuring 18x18x36" is ideal for housing your Jackson’s chameleon. Be sure to provide an ample variety of sturdy plants and tree branches for climbing and potted plants, such as hibiscus, pothos, or dracaena for the horned chameleon to hide in. Be sure any vegetation kept within the chameleon’s cage is non-toxic, as they will periodically nibble on leaves.

Substrate for Your Jackson’s Chameleon

Cleanliness in a Jackson’s chameleon cage is essential to preventing issues with bacteria and mold growth. As a result, substrate, such as mulch and soil, should not be used. Not only is it difficult to keep clean, but it may also be ingested by the chameleon, leading to potentially fatal blockages. Instead, the cage can be lined with paper towels or newspaper to make cleaning easier.

As cold-blooded creatures, Jackson’s chameleons depend on their environment to regulate their body temperature throughout the day. The ideal daytime temperature for the horned chameleon is between 70 and 80 degrees Fahrenheit, with a basking spot as warm as 85 degrees Fahrenheit. This temperature is best achieved by using an incandescent or basking light placed outside the cage in order to prevent burns. At night, they should have a 10- to 15-degree temperature drop, ideally between 65 and 70 degrees Fahrenheit. If your home does not get colder than these temperatures at night, nighttime heating should not be necessary.

Jackson’s chameleons benefit from exposure to full-spectrum ultraviolet (UVA/UVB) light. Exposure to natural sunlight is essential for providing vitamin D to live-bearing chameleons. Keep a UV light on for 10 to 12 hours a day to provide full-spectrum lighting within the cage. Be sure to change the bulb every six months to ensure proper lighting. Jackson’s chameleons also greatly benefit from spending time outdoors when the temperatures are in the ideal range. When outdoors, keep a close eye on the chameleon’s coloring. If it turns bright green or exhibits any other bright color, it may be overheating and will need to go inside.

Jackson’s chameleons are native to regions with a relatively high humidity of 60 to 80 percent. To achieve similar humidity levels inside the chameleon’s habitat, you can mist the plants within the enclosure multiple times a day or use a drip or misting system that will do this for you automatically. Maintaining proper moisture levels is essential to keeping your Jackson’s chameleon hydrated. They rarely drink from a water dish but will instead lick droplets of water off plants in their environment.

One major aspect of care is providing a proper Jackson’s chameleon diet. To guarantee a long, happy life for your pet, you need the right horned chameleon food and must understand how often to feed them.

Ideal Diet for a Jackson’s Chameleon

As insectivores, Jackson’s chameleons eat a wide variety of live bugs, supplemented with a bit of vegetation. In the wild, chameleons use their long, sticky tongues to catch pretty much any insect they come across. In captivity, we should strive to create a diet similar to what they would experience in the wild. They can be fed crickets and Dubia roaches as their primary staples, ensuring the insects are no bigger than the space between their eyes. A rich variety of fruits and vegetables, including greens, pea pods, bean sprouts and apples should also be offered throughout the day. Be careful to avoid offering spinach, lettuce or cabbage as horned chameleon food — these can be toxic. Do not feed your Jackson’s chameleon insects from your backyard. Many of our native insects are not only covered in pesticides and other lawn chemicals, but they are also deadly for your chameleon.

Feeding schedules vary significantly depending on the age of the chameleon. Very young Jackson’s chameleons need to eat as much as they can twice a day. The best staples for baby chameleons (1-3 months old) are extra small Dubia roaches and black soldier fly larvae. As the chameleons grow, they will be able to eat larger insects, and as a result, will need to eat less frequently. In adulthood, Jackson’s chameleons should eat a variety of insects and vegetation, consuming the equivalent of 6-8 large 3/16" - 1/4" Dubia roaches every day and 6-8 crickets every other day. Be sure to keep a close eye on how much your Jackson’s chameleon is eating and remove any uneaten insects once your chameleon is finished.

Before offering insects to your Jackson’s chameleon, it is important to first dust them with calcium and a vitamin and mineral supplement to ensure proper nutrition. Place the insects and any vegetables or fruit you will be offering into a glass jar with a sprinkle of the nutritional powder and gently shake to coat.

You should also feed the insects a diet of healthy fruits and vegetables, including dark leafy greens, prior to feeding them to your chameleon. This is known as gut loading, and it helps ensure more nutrients find their way into your chameleon’s diet.

The Jackson’s chameleon is a wonderful pet for anyone who enjoys watching magnificent creatures explore their habitat to hunt and capture their prey using long, sticky tongues. Relatively easy to care for, these chameleons will provide years of entertainment when given the proper habitat and fed a varied, nutritious, mineral-filled diet.

Topflight Dubia offers only the highest quality Dubia roaches. We can ship orders tailored to your specific needs, from smaller to bulk quantities, of a broad range of 3/16" to 1/4" Dubia roaches, ensuring your chameleon is well fed. For the healthiest and liveliest feeder insects sure to keep your Jackson’s chameleon happy for years to come, shop Topflight Dubia today! 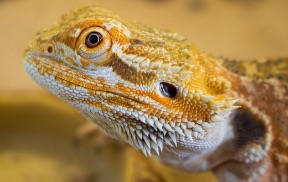 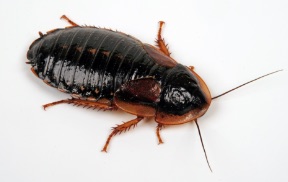