The Mexican red knee tarantula is a common name often associated with both Brachypelma smithi and Brachypelma hamorii. With bright red legs and a calm demeanor, the Mexican red knee is quite possibly one of the most easily recognizable tarantulas in the pet trade. Due to this, it has become popular on the silver screen and a consistent favorite that has landed a spot in the collections of both novice and expert arachnid enthusiasts. While its status is listed as 'near-threatened' in the wild, nearly all the individuals available in the pet trade are captive bred, making the Mexican red knee readily available in all stages of its life, from hatchlings (or spiderlings) to mature adults.

Both species are native to the Pacific coast of Mexico, so caring for these spiders is essentially the same. That being said, knowing the difference between the two species of tarantulas is just all part of the fun that comes with the hobby!

Mexican red knee tarantulas, on average, have a leg span of about 5 inches and are relatively long-lived. With proper husbandry, a female tarantula can live up to 20, or even 30 years. Males, on the other hand, have an average lifespan of about 10 years. This is because it is extremely rare for them to molt after they become sexually mature, if it happens at all.

Slow-moving and calm, the Mexican redknee tarantula is sometimes slated as a beginner species for owners. This tarantula is easily handleable as long as the person holding it keeps their movements steady. Rapid movements may spook the spider, and doing so may result in the animal defending itself. Since the Mexican red knee is one of many “New World” species, its first line of defense is to kick the urticating hairs off its abdomen. The hairs can both itch and burn, and while it isn’t necessarily dangerous to humans, these hairs can cause an allergic reaction if inhaled. The reaction can also occur topically and leave a red rash that can last a few minutes or even a few days depending on the keeper’s individual reaction. The Mexican red knee tarntula’s second line of defense is the obvious, which is its bite. They do possess a mild venom similar to that of a bee or wasp, so if you or someone you know has a severe allergic reaction to either of those, they should not handle your tarantula.

Many keepers choose to house their Mexican red knee tarantula in a glass aquarium simply because they enjoy watching their animal. Mexican red knees can be housed for the entirety of their adult lives in something that's the size of a 5- or 10-gallon aquarium. Floor space is more important than height when it comes to these ground-dwelling species, as they are known to climb at times and falling from a high level to the bottom can potentially harm them. In the wild, they are burrowers who are often found in old rodent dens or crevices. In captivity, however, they will create a burrow for themselves if given the proper substrate. A minimum of 4 inches of substrate is highly recommended for this species. A mix of organic chemical and fertilizer-free potting soil, sphagnum moss and/or coconut fiber is ideal. Not only does this mixture provide the depth needed, but it also helps to keep the proper humidity required for the Mexican red knee. Places for the tarantula to hide are very important when it comes to keeping these animals, as they can become stressed and die from constant exposure. Plants — artificial or real — proper substrate depth and “hidey-holes" such as cork bark, wood or even small overturned clay pots can help provide the necessary privacy required for these animals.

Plastic or acrylic enclosures are much better to regulate both the temperature and humidity inside of the space for your animal, but that doesn’t mean it’s impossible to keep the tarantula within a glass aquarium. Ideally, the humidity for your spider should be between 60 and 70 percent. With a glass enclosure, this can be achieved with some modifications to the wire top. Adding a small, shallow water dish helps with the humidity inside the enclosure as well. However, if you live in a dry environment, you might have to turn to a light daily misting if the levels are not consistently high enough.

The recommended temperature for the Mexican red knee is between 75 and 80 degrees Fahrenheit, which can be achieved by placing a heated mat under one side of the enclosure. However, it is important for your tarantula to also have a “cool" side on the off chance that your enclosure were to become too hot. You can monitor and regulate both the temperature and humidity inside your tarantula's home with a thermostat that doubles as a hygrometer, as well as using a temperature gun to read your hot spots in the enclosure. If the humidity is too high, you might notice your Mexican red knee move away from the water dish and huddle in a corner. But if the humidity is too low, you might notice your tarantula around its water dish. Watching your animal is a good indicator, but the added stress of improper husbandry can be prevented with the correct equipment and housing.

Be sure to spot clean the enclosure as needed to remove any leftover food items, faeces, mold or molts. Deep cleaning is rarely necessary, but can be done once every six months or so if needed.

The Mexican redknee tarantula diet consists of the prey that the spiders hunt. Common feeders that are readily available at the pet stores are Dubia roaches, mealworms, superworms and live crickets. Unfortunately, crickets can sometimes be loaded with parasites, and both mealworms and superworms are high in fat. Therefore, it’s important to offer some sort of variety for your animal. A pinky mouse or lizard can be offered occasionally, as it is debated that feeders too high in calcium can cause issues with molting. Regardless, make sure to remove whatever is left of the food item (which is usually left in a nice compacted food bolus) to keep your tarantula’s enclosure clean. That being said, it is NEVER a good idea to catch animals from outside to add to any Mexican redknee tarantula diet. Doing so not only exposes your tarantula to parasites, but can also unknowingly expose it to pesticides that can ultimately kill your spider.

If your Mexican red knee refuses to eat, do not be alarmed. There are a number of factors that can contribute to this, especially if you’ve just recently brought it home. This could also mean that your Mexican red knee could be coming into a molt. Be sure to remove any live food items that your tarantula has refused, as they can bite and harm, or even kill, your spider. If they continue to refuse to eat and begin to show signs of lethargy, your tarantula may be ill, stressed or suffering from poor husbandry.

Most tarantulas get their water intake from their food items. Keeping a small, shallow bowl such as a soap dish, or even a bottle cap (depending on the size of your tarantula), not only provides your Mexican Redknee with a drinking source, but also aids in keeping the humidity up. Be sure to provide your tarantula with fresh water daily, keeping the bowl clean and free of debris.

The Mexican red knee is an arachnid, and like all arachnids they have an exoskeleton. As a spiderling, molts are more frequent as your tarantula is growing but once they mature, molts slow down exponentially for females, and almost indefinitely for males. Tarantulas grow new fangs and can also grow back lost limbs through the molting process. You can even tell the sex of your spiders through their discarded molts!

As a spiderling, one of the more visual signs of an upcoming molt is that your Mexican red knee tarantula will begin to darken. As they grow into their more “adult" colors, this will become harder to see. However, one of the tell-tale indicators of a molt is the refusal of food. It is also important to keep the humidity up, as a dry environment can cause your Mexican red knee tarantula to become stuck during its molt and die. If you happen to walk in and see your spider on its back with its legs up, don’t be alarmed! It has just begun this lengthy process and it could be hours before the molt is complete; it is very important to not disturb it during this vulnerable time. However, if there was food that was offered, it needs to be removed immediately because your Mexican red knee will emerge soft and unable to defend itself until it’s exoskeleton and fangs harden a few days later.

If you see that your spider is upright with its legs shriveled beneath it, this is an indicator of an illness, which could be caused by incorrect husbandry or something more. It’s advised to seek out a veterinarian with knowledge of arachnids, or even an experienced keeper. 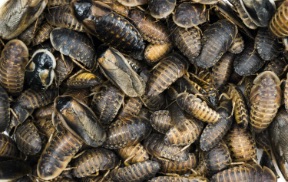